It’s snowing! I was so happy when my husband told me to look out the window in the office and I rushed to open the veranda door and stand there for some times. Yes, indeed, it’s been a long time since I stood up in the snow.

The temperature outside measured -1°C, it was not that long though, was only 20mins of snow and then it stopped. But I felt really good and was asking for more, lol! 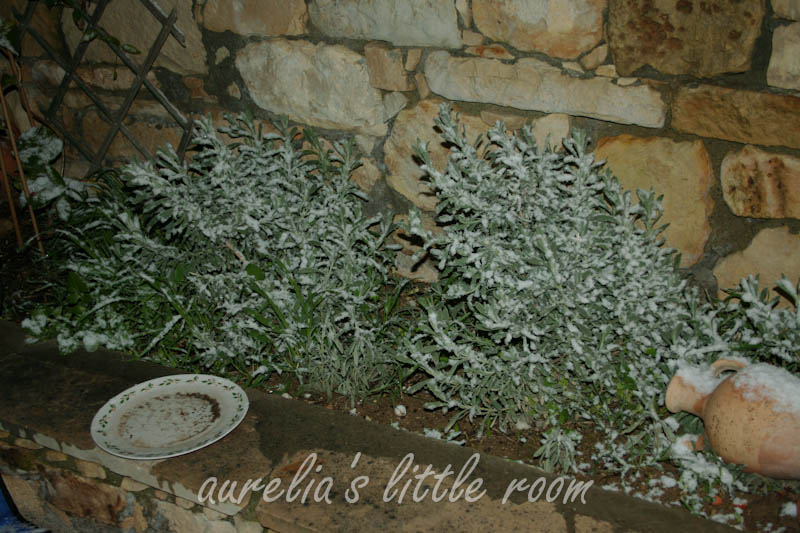 It’s not a lot of snow that night, but I loved it! That’s my Lavenders, I do hope that they will survive, cause I heard that we’re going to have some more snow after these few days of warm sun. 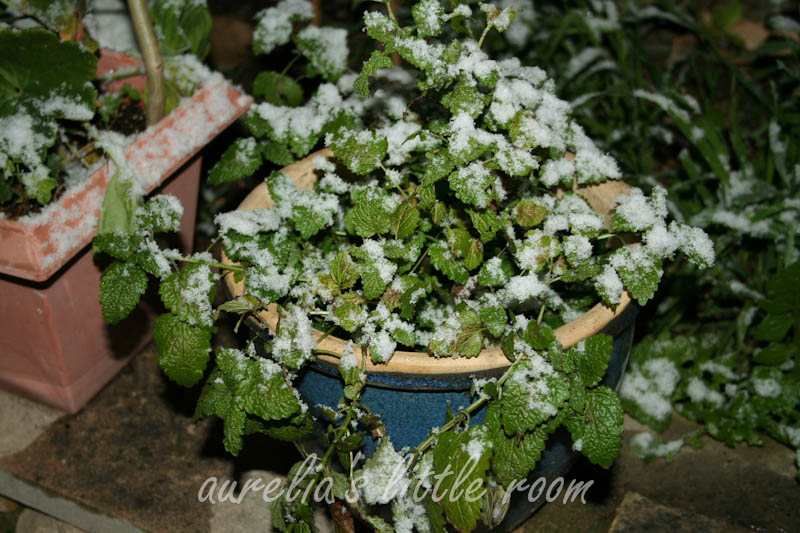 My Lemon Balm, tea supplier, they hardly survived, too cold for them, they should be in the environment of 20ºC with warm sun. Today’s perfect to the Lemon Balm to get her strength back even though it’s only 10ºC outside but with a big and very warm sun, hopefully she can smile again 🙂 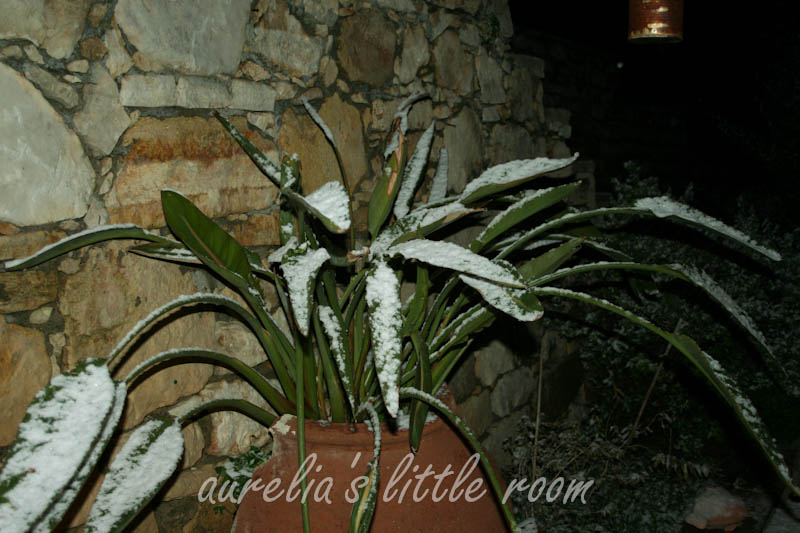 Our beautiful Birds of Paradise – if he can speak, he might swear at us! He used to be in the big pot, in the very warm environment with very less sun and very less cold, he was blooming every now and then, and suddenly 7 months ago when we decided to move out from the city, we took him to his new environment, his leaves burned because of very strong sun x_x and now since the new pot is only holding the soil (decoration purpose ;)), he has to suffer from a harsh winter with snow, and they are very sensitive to cold as the cold can damage its leaves and flowers. Hopefully today’s sun can give him a nice warm hug! 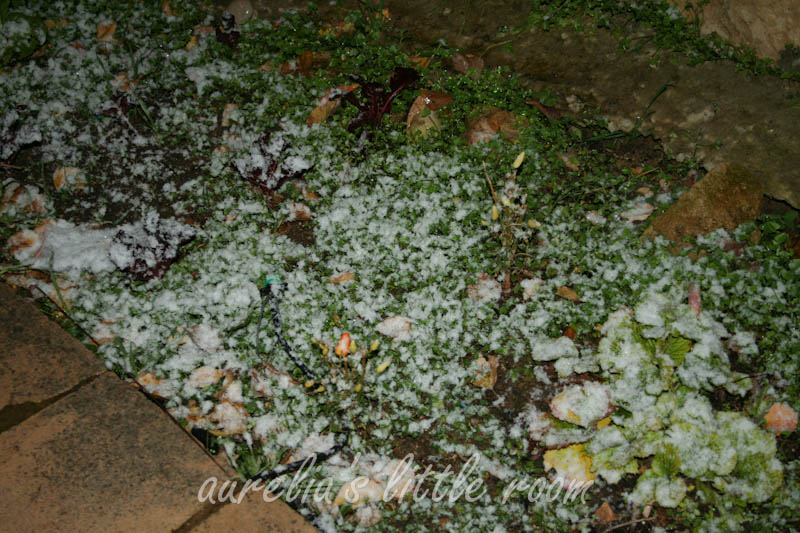 There goes my salad, strawberry and chili x_x It’s my fault though, I should have install the mini green house for them, anyway, they are survived but very slow grow due to no sun at all, so I hope this week (they said we’re going to have plenty of sun) all of them will rejoice for the sun! 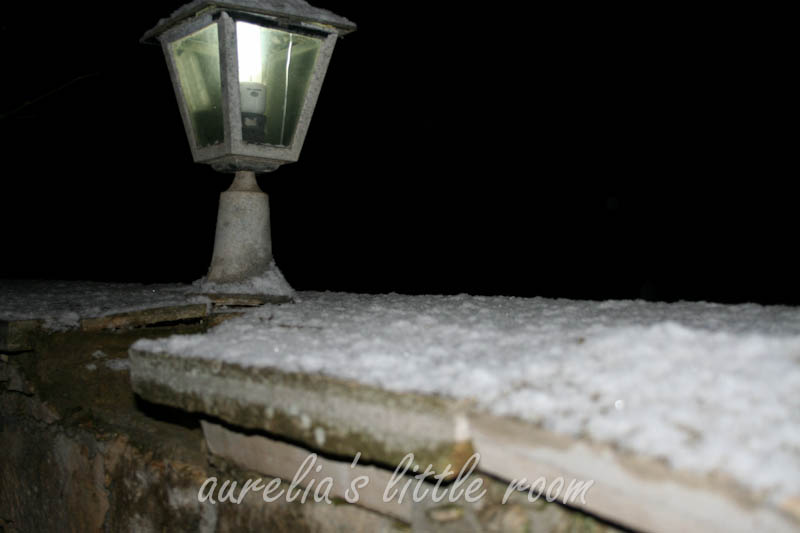 That night was only a 0.5cm high of snow, which was nothing, but it did make my night, we went outside and started to throw “mini” snow ball to each other, crazy night! 😀 but it continued on… 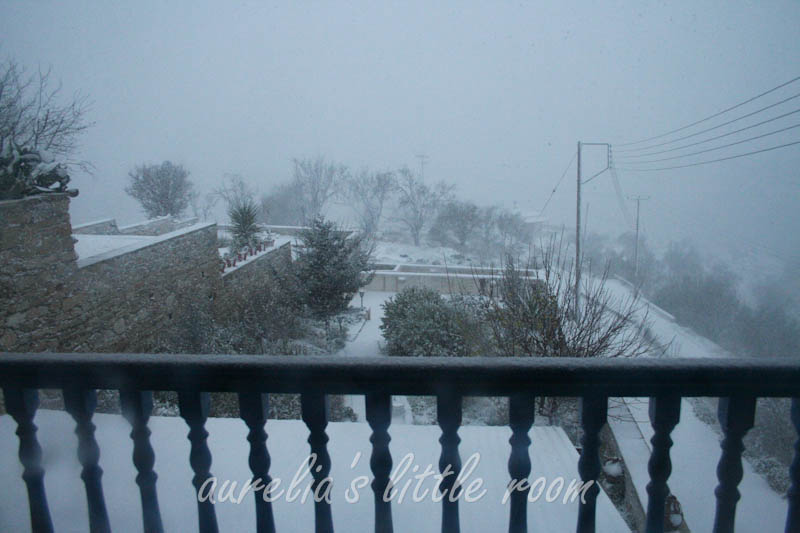 Taadaaaa….that was 7am in the next morning! It was very dark and super cold, measured -5ºC, and all white! Amazingly white and this is the first time in my life, I woke up in the morning look out my window and it’s all white without interruptions! No footprints, nobody’s passing, no cars, no noise, just a peaceful moment! I jumped off my bed, took camera and voila..pictures!! 🙂 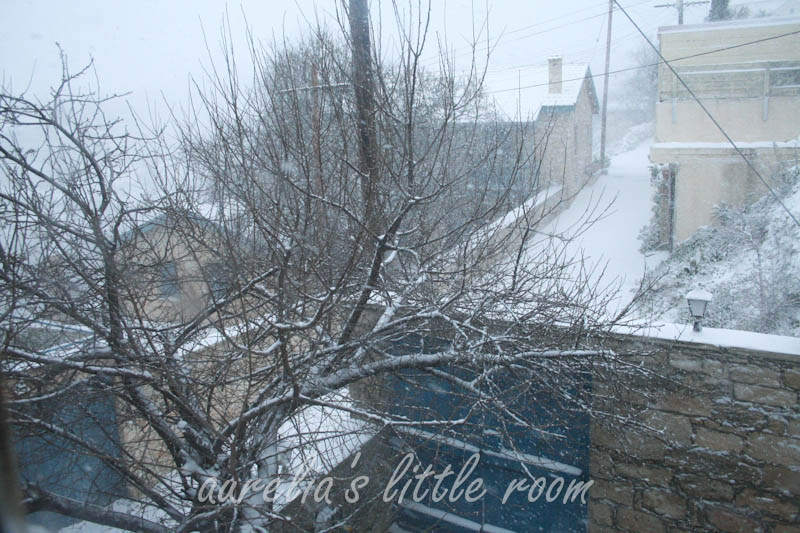 The front door, all white, very short sighting, it was still snowing like crazy and yes..that’s the road going up to the village center, since we are very less people living in this village, so it’s even more quite now 😀

Backyard was…a mess! lol! But I don’t care! It’s beautiful and super fresh, it’s cold but fresh. We went outside finally! Took some pictures of ourselves, lol! 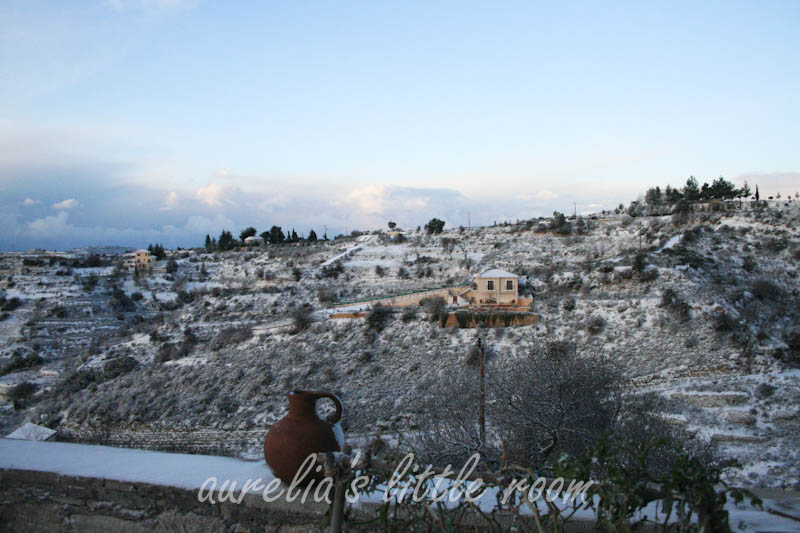 The village blanketed with snow 🙂 what a beautiful scenery that morning, of course no sun at all and freezing! 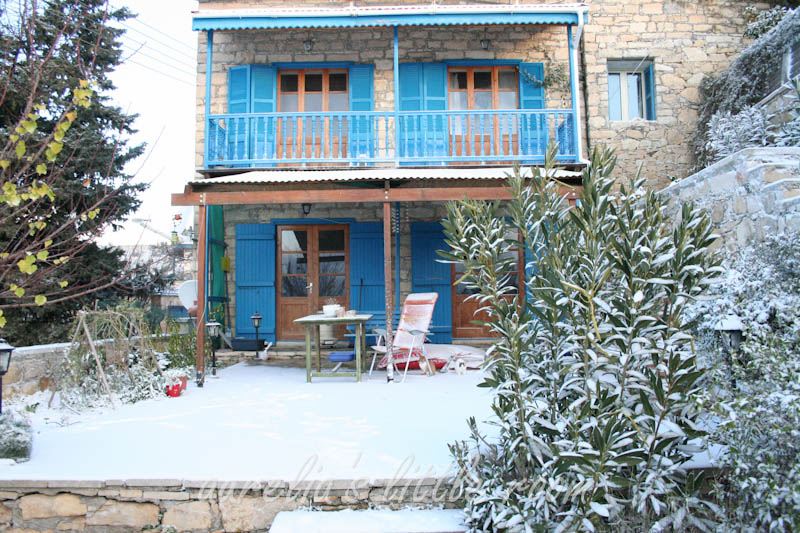 Our small house taken from the backyard, all white, and blue, and warm inside with fireplace, but it was not the time to be inside! Everybody’s out! 😀 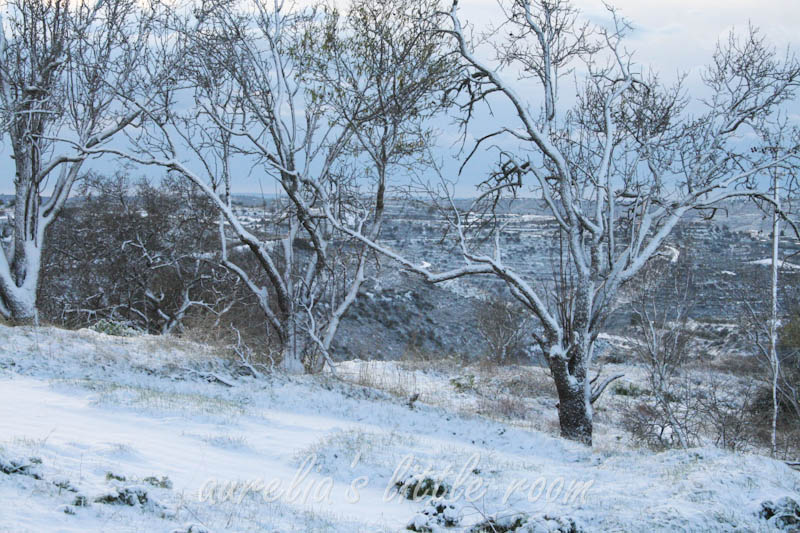 Love to see all the trees covered in snow 🙂 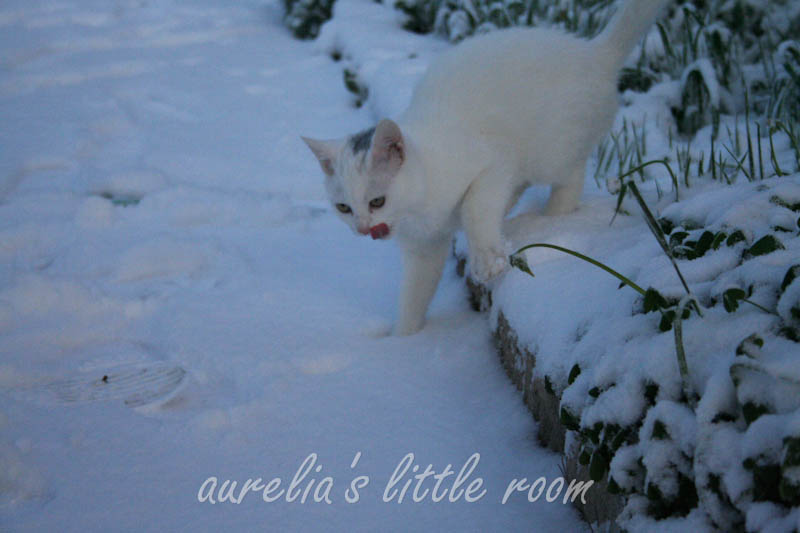 Einstein’s first step on the snow, she was exciting, she tasted the snow and ran like crazy, she loves it! 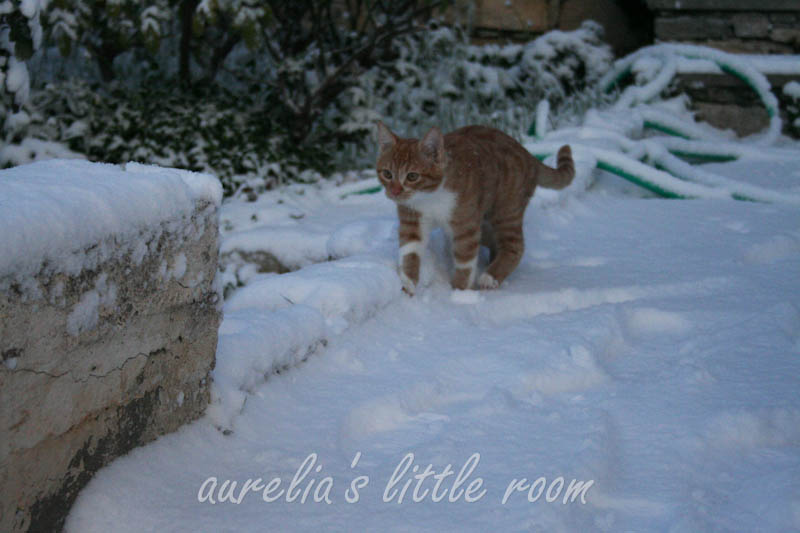 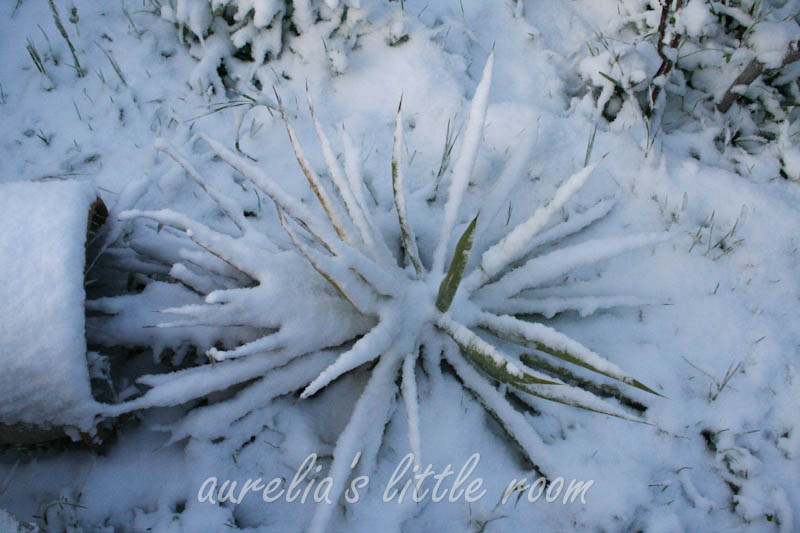 Everything in the garden were upside down, most of the pots were on the ground due to big wind that we had for that 2 days. But it looked beautiful though 😀 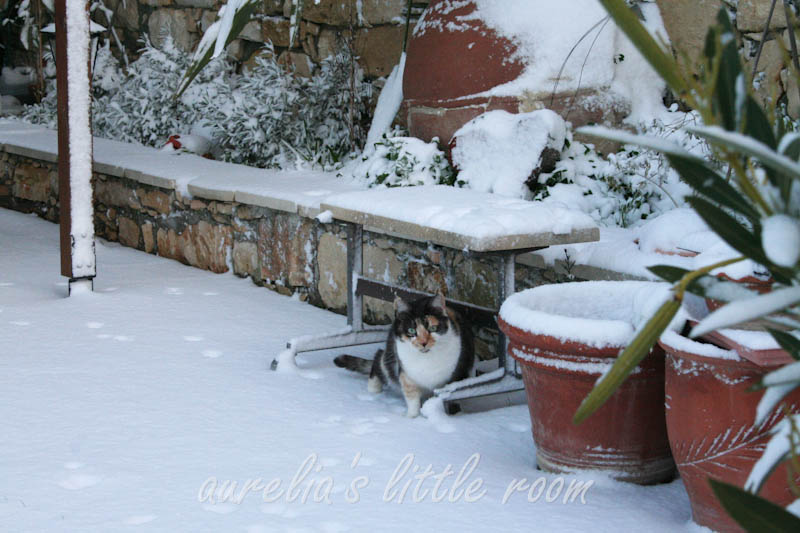 Nano’s first step on the snow..she was confused, right after I took her picture, she ran into the house under the sofa, as usual. 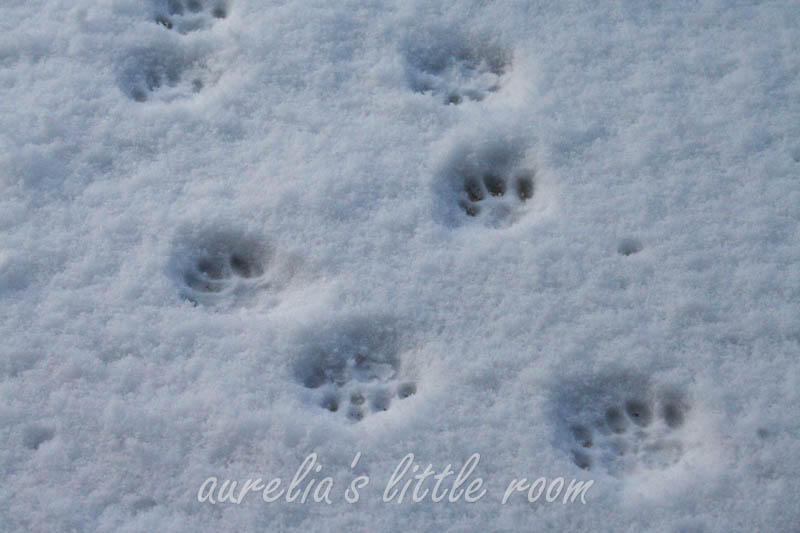 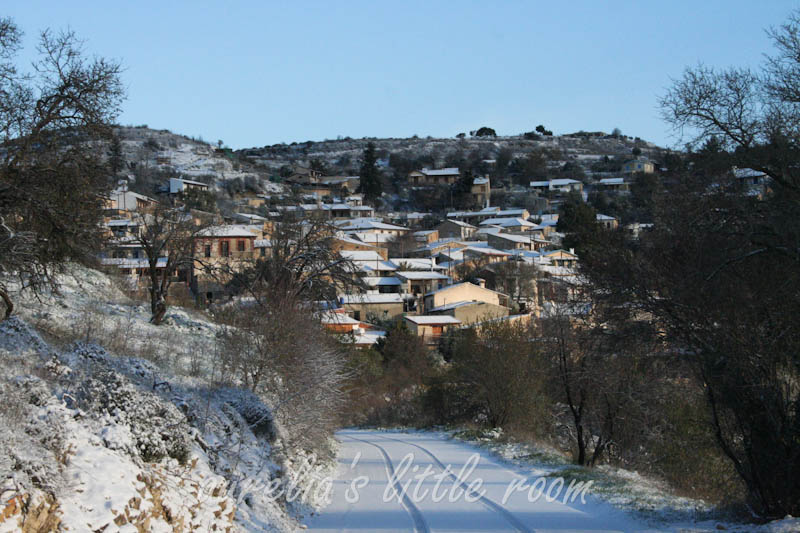 That’s the village center, at the back of our house. So lucky that we did not live there among those houses! It’s beautiful but no! 😀 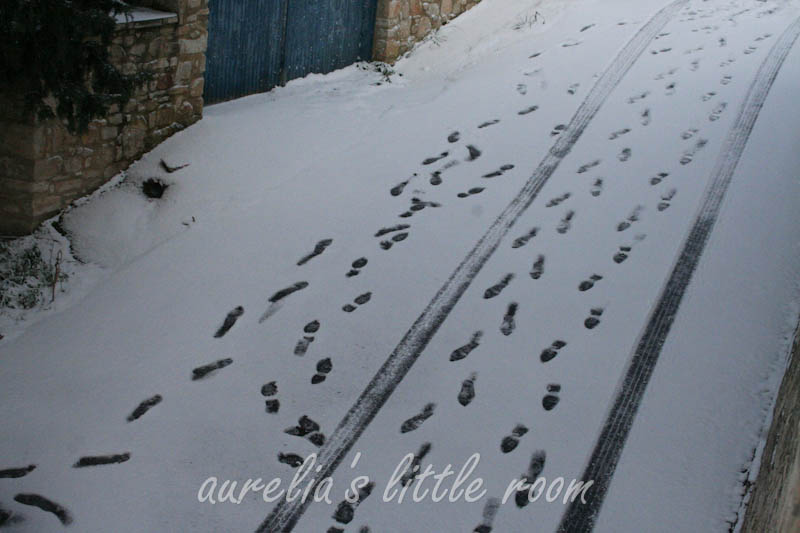 We went for walk, it was such a quite place, saw nobody’s on the road, only a cat passed us, and I took this picture, it belonged to us, 2 pairs of footprints, but hey, look..up and down, and I just realized it lol..bit slow lately! 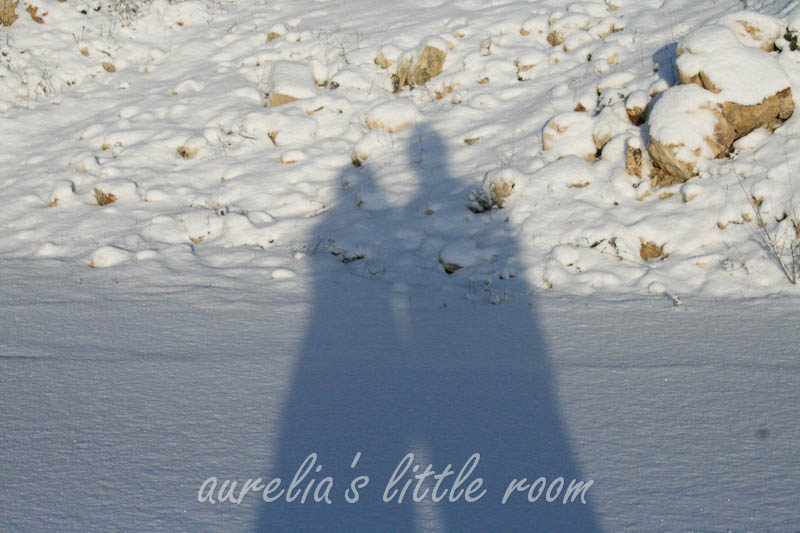 We were on the empty road (as usual) with “virgin” snow, no marks yet, and shadow posed! 🙂 Hope to have snow soon before my 3 weeks holiday to Indonesia.

Later that day, it was snowing like crazy and it stayed for 4 days before finally melted by rain water. Now we enjoy the warm sun of 12ºC with fresh air. What a wonderful day!

Hope you enjoy the journey!